Making the Transition to a Donation Based Walk Event

Because ds-connex partners with so many Down syndrome organizations nationwide, we are fortunate to learn about all the different walk events. While everyone has the same goal in mind – to raise money for their local organization – they may not employ the same tactics to get there.

One hot topic of debate has been whether or not to charge a registration fee to attend the walk. We work with partners who do charge a fee, while others do not, and there are many variations in between (some fees include shirts, some are group fees, etc). However, there aren’t many organizations that have gone from charging a registration fee to not charging a fee. Club 21 Learning and Resource Center decided to do just that for their 2016 walk event; because ds-connex saw the success of their event, we decided that we wanted to learn more about their transition. We were pleased to speak with Janice Wells and Laura Stoner about their 2016 walk and the journey they took in deciding to forego the walk registration fee.

According to Janice, Club 21’s executive director, Nancy Litteken, is a “100% visionary”; everything she touches “turns to gold.” After speaking with Jim Hudson, Executive Director of the Down Syndrome Association of Greater Cincinnati, Nancy was inspired by the success of the Cincinnati Buddy Walk. That event does not charge a registration fee and raised well over $400,000 in 2016, and Nancy began thinking that Club 21 could do the same. The decision to not charge a registration fee was not quickly made, however; Nancy spoke with many Club 21 families to request their input on the matter. At first, some of their team captains were concerned, as not charging a registration fee would mean that their teams wouldn’t raise as much money. However, they soon realized that not charging a fee would allow more people to participate in the event, such as their children’s classmates. After a month of debating, the organization decided to “rip the bandaid off and go” and announced that this year’s event would not have a registration fee.

Unlike the Cincinnati event, though, Club 21 opted to charge the participants who wished to receive an event t-shirt. They feel that this gave people more control over how they would donate; participants could choose whether or not they wanted a shirt. They were hearing from people that they didn’t need another event t-shirt, and it’s becoming more of a trend for teams to create their own t-shirts. But, the option was still there in case someone really did want an event t-shirt. By having that choice, Janice and Laura feel that people were just as likely to spend the same amount of money, but they didn’t have to provide a t-shirt to each participant.

Before the event registration opened, Club 21 was careful to communicate with their team captains about their plan to not charge a registration fee. They wanted them to be familiar with the change, and understand that the event would be “donation based” (as opposed to a “free event”) and that they would still be needed to fundraise. Team captains were excited at the prospect of a more inclusive event; without the registration fees, more schools could participate. Parents could bring their children to support their classmates with Down syndrome at no cost, but once they arrived they were happy to donate. This “opened many doors” and allowed families to build their teams out with worrying about the cost of registrations. 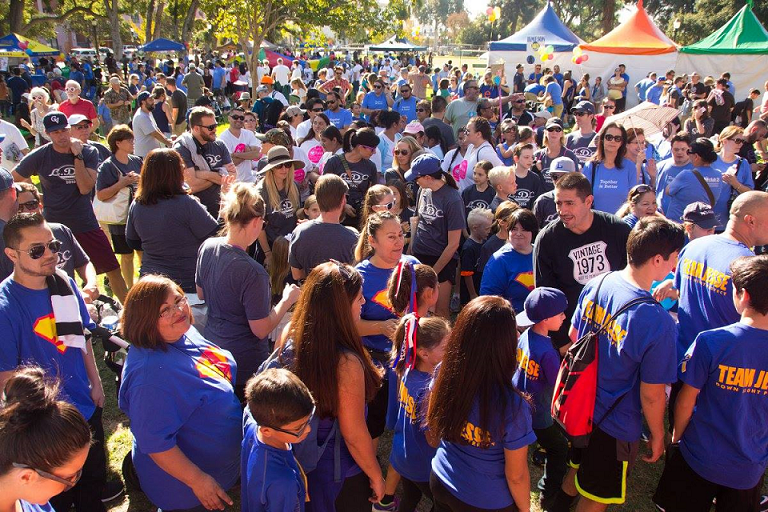 While Club 21 found great success in transitioning to a donation based event, Janice and Laura were cautious to recommend this structure to all organizations. They emphasized how long they spent debating the conversion, and how they had to set the expectation of fundraising. They used creative incentives to encourage team captains to solicit donations. They consistently reminded their team captains about fundraising, but they were careful to not be too pushy. They were successful in these efforts, which is clear in the outcome: in 2015, their event raised $166,000; in 2016, their event increased to $216,000. The attendance at their event also increased in 2016. Their hard work certainly paid off, and we look forward to watching their event grow again this year.

Event Coordinators – we’d love to hear from you! Do have an idea or story you would like to share? Send them to us at stories@ds-connex.org.